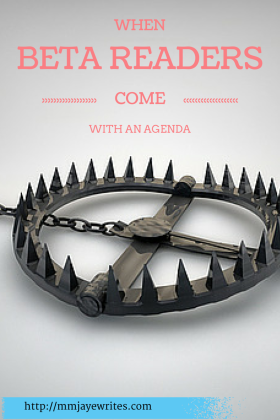 I just read an article by Victoria Strauss for the Writer Beware blog which verified my own suspicions based on the following incident:

I recently published a favorable review of an author’s novel, and I was browsing other reviews it had received on Amazon when I saw one that really stood out: it was a mean-spirited, venom-spitting piece in total contrast with what other readers thought of the book in question. You’ll probably thing that the reviewer was a troll. No. This was an eponymous review that offered a valid link to the lady’s site. Of course, I gave her site a hit just to see what she was about. The lady, apart from reviewing also worked as a freelance editor.

I got in touch with the author and asked her if she had any idea why her book had been targeted by that person. She confirmed my suspicions. The lady reviewer had contacted her expressing her delight at the prospect of beta reading. The author gladly provided her with an advance copy. However, the feedback she received was dishearteningly negative: the beta reader had spotted all sorts of errors, the book was in dire need of serious editing, but, hey, the beta reader could help out for a fee! The author told her off, and next she heard of that person was through her book’s reviews page.

Apparently, that’s becoming a pattern. There’s a growing number of documented pitfalls a self-published author can fall into, but that “friendly” approach is squeezing through to stand in the front row. I find myself truly riled up at the thought that someone in the know will play up on every writer’s weak spot–the need for reviews–to get access to her work, aiming all along at either making a profit or trashing it. I had half the mind to out that person on Amazon, but I’m not confrontational by nature and wouldn’t be able to stomach the possible backlash.

How would you deal with a beta reader who suggested “improving” your book for a fee, knowing that a rejection might lead to a negative review?

To read the article on Writer Beware click here.

10 thoughts on “When beta readers come with an agenda”