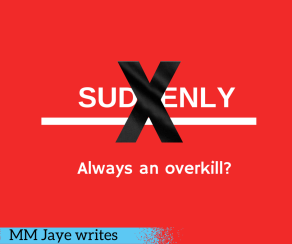 I had read that “suddenly” is a bump-word for editors, but I hadn’t given it much thought while revising my manuscript of Fate Accompli. However, a couple of beta readers, Effrosyni Moschoudi, author of The Lady of the Pier among them, mentioned the no-suddenly rule. I did a quick FIND search and saw I had 36 “suddenly’s” in my 96,000-word story. That didn’t seem too much, but for the sake of practice, I decided to look into doing away with at least some of them.

Here’s what I came up with:

By default, a sudden occurrence cannot be non-sudden.

Before: “Monica shot to her feet so suddenly her bare left foot stepped hard on the tilted empty glass, crushing it.”

That was clearly redundant as when one “shoots to her feet” it has to be a sudden movement.

This one is a clear-cut overkill case:

“Her thoughts were interrupted by Flora, who suddenly appeared seemingly out of thin air with a telephone handset in her hand.”

One cannot appear out of thin air in a non-sudden manner, so that one went away.

Before: “For years, he’d been unable to notice any of the stuff that was suddenly visible”.

After: “For years, he’d been unable to notice any of the stuff that was now distractingly visible.”

Before: “She pushed back the worry of Beth’s impending arrival, suddenly wishing he’d turn his attention to her.”

After: “She pushed back the worry of Beth’s impending arrival, now wishing he’d turn his attention to her.”

Before: “Her hazed mind suddenly focused on the answer.”

After: “Her hazed mind somehow focused on the answer.”

Change of heart or mood can legitimately be sudden

Nevertheless, there were several instances where I couldn’t get rid of “suddenly”—and didn’t want to. I realized that the common denominator was that they were all a sudden change of emotion, change of mind or a non-clear-cut sudden occurrence. I did some digging and found that, indeed, even hard-core editors accept that when a character’s mood abruptly changes, “suddenly” enhances this shift. So here are some phrases where “suddenly” stuck.

“Monica removed the phone from her ear and stared at its blank screen. Suddenly, it was as if a sound wall had been removed, and the deafening commotion was piercing her ears again.”

“It seemed as if all her blood vessels were suddenly sucked dry, pulling her center of gravity downward.”

“Ignoring the need to ask about Monica’s well-being and whereabouts that suddenly erupted in him, Alex touched her arm gently. ‘Beth, are you feeling all right?'”
Nothing can “erupt” non-suddenly, so even though there’s a sudden change of feeling, the verb suffices.

And then there are the cases where “suddenly” could (should?) be removed, but I just didn’t do it. Because I can.

“The sky was full of dark pregnant clouds. A wicked wind had suddenly picked up, and Alex saw the leafy tops of the ancient oaks and elms of Richmond Park whisking incongruously following its capricious behest.”

In the phrase above, “suddenly” adds to the cadence. Try reading it without it. Something is amiss. So it stayed. Just like Lionel Ritchie kept his in the song title I chose to headline this post…

That was my takeaway from that editing exercise. For an editor’s view on the subject, check out K.M. Weiland’s article.

Do you consciously edit out “suddenly” from your writing? Is it on your editing check list? Let me know with a comment.

Don’t forget that my giveaway for a $25.00 Amazon Gift Card, 3 ebooks of Fate Accompli and a set of laminated bookmarks is running until the 23rd. Here’s the link:

Fate Accompli is now out on Amazon in two heat versions. The links below will take you directly to your Amazon store.

If you’d like to read the first chapters of Fate Accompli, they’re available on Wattpad. (4,000 views and counting…)