After talking up the blurb of A. Star’s Wish For Me (which I’ve also raved about here), today I’ll showcase the blurb of a dystopian, young adult novel that grabbed my attention. 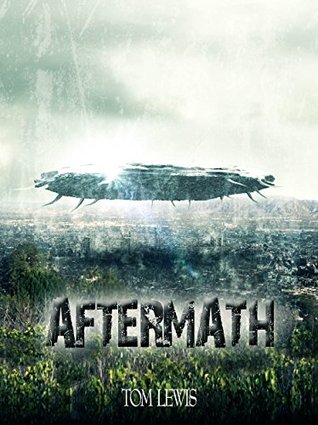 The end of the world came fast. Between the time the warning had sounded on the TV, till when 16-year-old Paige O’Connor awakened sometime later, civilization had been crushed.

The attacks had come by “them” – those things in the ships in the sky that had appeared suddenly, and without warning.

And as Paige would soon discover, the attacks had only been the beginning.

Aftermath is the first book in the new After the Fall dystopian action series, which follows a young girl’s struggle for survival in the wake of civilization’s collapse, and humanity’s domination by an alien race of beings.

First off, the cover is spot on. From the cold color texture to the solid font, it’s an example of excellent dystopian branding. Also,

The blurb is good, but I felt it’s lacking in some ways. Instead of giving an outline of the plot, what it more or less explains is the notion of “dystopia”: “The end of the world came fast” – “civilization had been crushed” – “humanity’s domination by an alien race” (which, apparently, are called “them” in the book).

As a reader, I’m left wondering: What makes this book different from all the young adult dystopian novels out there?

I have noticed that, when writing a synopsis, authors sometimes play up their genre more than the story. When the cover brands the book well, some key words are enough to brand the genre. The rest of the blurb should show the reader why this story stands out from the rest, and vague references such as “the attacks had only been the beginning” and “a young girl’s struggle for survival” are staple notions in a dystopian book (doesn’t everyone struggle for survival when aliens take over?)

I read some of the Goodreads reviews and saw that there’s much more to this book than meets the eye (blurb-wise) that, if added, would give a clearer identity to the plot.

If you’d like more info on this book, here’s the purchase link: Amazon

You can check out its Goodreads page as well.

What do you think of this blurb? Would it make you click its purchase link?