What better way to wish

to all of you wonderful and supportive readers than a recommendation of an inspiring, heartwarming tale for your young ones—or the young at heart!

I’ve just read and reviewed Runaway Smile, wrtten by my author friend Nicholas Rossis whose best-selling epic fantasy series, Pearseus, I’ve enjoyed immensely, and I truly loved it! Nicholas has uploaded the story here where you can read it for free! The fantastic illustrations are the work of Dimitris Fousekis.

I picked this title up as I’m a fan of Nicholas Rossis’ epic fantasy series (Pearseus) and I was curious to see how a fantasy writer tackles the challenge of writing for kids. Smoothly, apparently. This isn’t a happy-go-lucky fairytale. The boy of this story is on a quest. Unlike Alice, this little guy is used to the bizarre world he lives in, and takes milk-surfing ants and complacent monsters in the closet at a stride. What he can’t deal with, though, is the loss of his smile. On his way to school, he comes across colorful characters with huge smiles plastered on their faces, but although they vy for the little one’s attention, they can’t seem to listen to him. They’re grown ups after all; self-serving and self-centered. Each and every one, although full of promises, fails to bring happiness to our little hero. But in the end, he finds what he’s after in the sweetest possible way, and he knows how to keep it forever.

This story is layered with thought-provoking semiotics that will attract parents as well. Fantastic illustrations make our boy’s trek to school come to life, and the summary in verse at the end is a touch of genius and extra proof of the author’s diverse talent. This is one book you won’t regret reading to little ones, but even if there aren’t any around, just go for it. You’ll love it. 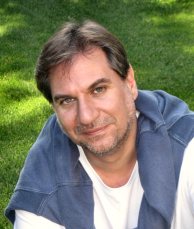 Avid reader. Web developer. Architect by training, holder of a PhD in Digital Architecture from the University of Edinburgh. Now, author.

Nicholas Rossis loves to write. Runaway Smile is his first children’s book, out of a total of six. The next one is currently being illustrated.

Except for his epic fantasy series, Pearseus, he has also published The Power of Six, a collection of short sci-fi stories, and the Greek translation of the Tao Te Ching.

He lives in Athens, Greece, in the middle of a forest, with his wife, dog and two very silly cats, one of whom is always sitting on his lap, so please excuse any typos in his blog posts: typing with one hand can be hard. Mercifully, all his books are professionally edited!

Born in 1966 in Tripoli, Libya to Greek parents, Dimitris grew up in Rome, Italy and Athens, Greece. He studied Geology at the University of Athens. During his studies, he illustrated various Paleontology-related theses and projects. Between 1992 and 1997 he worked for the Ministry of Culture, illustrating the objects unearthed during the Athens Metro construction.

Since 1997, he has freelanced with various design agencies, advertising companies and publishing houses. He has also illustrated for two musems – one in Papigo, Pilio (WW F) and one in Tinos (Marble Museum).

He is a member of the design group Parachute Font and collaborates regularly with Yalos Branding. His latest projects include the co-creation of Fuzzylon. Since 2003, he has increasingly focused on children’s books illustrations. He has already published a number of children’s books (nine so far, with a number of further titles currently under work).

Since 2010 he has lived permanently on the island of Hydra, where he teaches painting and has had his first exhibition.

You can find more about Dimitris and his work on http://www.dimitrisfousekis.com

Fate Accompli is now out on Amazon in two heat versions. The links below will take you directly to your Amazon store.

If you’d like to read the first chapters of Fate Accompli, they’re available on Wattpad. (3,000 views and counting…)

3 thoughts on “Happy Holidays with an inspiring children’s book!”