First of all, I should officially announce that Fate Captured, my upcoming contemporary romance, won an award! First place in the Contemporary category of the 2015 Heart to Heart contest, organized by the San Francisco Area chapter of RWA.

I submitted only part of my manuscript to the contest, and it took me a while to shape it the way I wanted, but it’s ready to pop out of the oven. I love the story, I’m head over heels in love with Trish and Markos, and I hope readers will love them, too. Again, I prepared two versions: a “clean” story (closed door bedroom scenes) and a Spicy one where nothing is insinuated. 😉

Fate Captured is Book One in the Greek Tycoons series. It’s a standalone contemporary romance, featuring a cocky Greek hero, a meddling heroine who’s set on fixing him … after she breaks him, a Greek island setting, hot conflicts, hotter makeups and an epic HEA.

The book will need a boost from early reviewers, so I’ve decided to send out Advance Reader’s Copies to readers who enjoy reading romance books. If you’re interested in receiving a complementary copy of Fate Captured before its official release on April 21 in exchange for an honest review on Amazon, please sign up, using the following form: 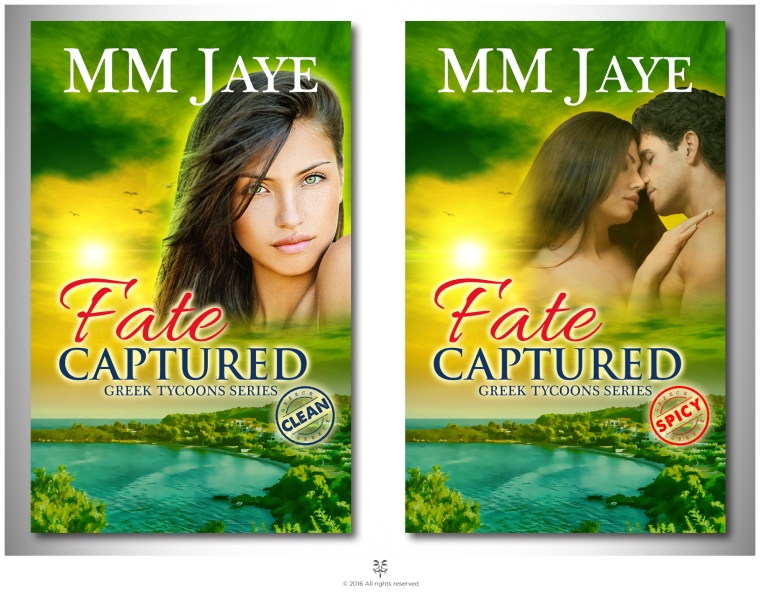 The beautiful covers for the two versions are credited to Alex of 187Designz.

And here is the blurb:

Trish Swan is living her dream. She gave up chilly Boston for a sunny Greek island to write her novel. But she likes hot crime between the pages, not before her eyes. Yet, she doesn’t think twice about turning in a video she captures of a cop roughing up a man–but maybe she should because fate throws her a curve ball she least expects.

The mind-numbingly hot Greek from the bar isn’t just a cocky bad boy in need of a little love. He’s a shipping heir wrongfully accused.

Career in ruins, Markos’ life is a hot mess, all thanks to one sexy do-gooder who keeps popping up in the wrong place at the wrong time. Touching her becomes addictive, so maybe he could forgive her for doing her civic duty. But when she dredges up ghosts from his past, messing with his sanity, she gets a real taste of what he’s capable of.

With a man’s life on the line, Trish prepares for a head-on collision that will push Markos over the edge. What does she stand to lose anyway? Her heart?

He already owns it.

Here’s the link to the signup form again: http://goo.gl/forms/0kb0h8h7ek

In case, you remember my previous release, Fate Accompli, this book has been pulled down from Amazon, I’ve thoroughly edited it and will relaunch it early summer as Fate Awakened, Book Two in the Greek Tycoons series.

Whether you sign up to get an ARC or not, thank you for visiting my online home! I should blog more, but this year I work full time, and it’s not easy to juggle everything. I promise I’ll try harder though. 🙂